Niobium, formerly known as columbium, is a chemical element with symbol Nb (formerly Cb) and atomic number 41. It is a soft, grey, crystalline, ductile transition metal, often found in the minerals pyrochlore and columbite, hence the former name “columbium”. Its name comes from Greek mythology, specifically Niobe, who was the daughter of Tantalus, the namesake of tantalum. The name reflects the great similarity between the two elements in their physical and chemical properties, making them difficult to distinguish.

The English chemist Charles Hatchett reported a new element similar to tantalum in 1801 and named it columbium. In 1809, the English chemist William Hyde Wollaston wrongly concluded that tantalum and columbium were identical. The German chemist Heinrich Rose determined in 1846 that tantalum ores contain a second element, which he named niobium. In 1864 and 1865, a series of scientific findings clarified that niobium and columbium were the same element (as distinguished from tantalum), and for a century both names were used interchangeably. Niobium was officially adopted as the name of the element in 1949, but the name columbium remains in current use in metallurgy in the United States. 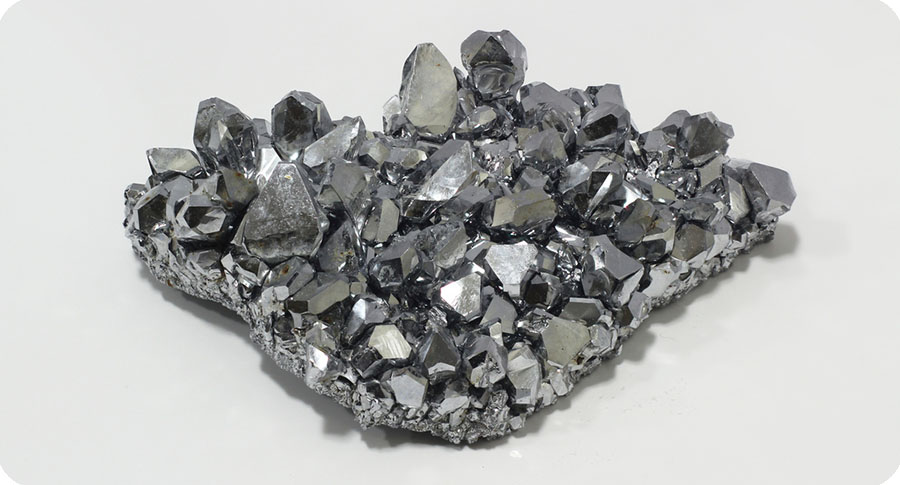 It was not until the early 20th century that niobium was first used commercially. Brazil is the leading producer of niobium and ferroniobium, an alloy of 60–70% niobium with iron. Niobium is used mostly in alloys, the largest part in special steel such as that used in gas pipelines. Although these alloys contain a maximum of 0.1%, the small percentage of niobium enhances the strength of the steel. The temperature stability of niobium-containing superalloys is important for its use in jet and rocket engines.

Niobium is used in various superconducting materials. These superconducting alloys, also containing titanium and tin, are widely used in the superconducting magnets of MRI scanners. Other applications of niobium include welding, nuclear industries, electronics, optics, numismatics, and jewelry. In the last two applications, the low toxicity and iridescence produced by anodization are highly desired properties. Niobium is considered a technology-critical element.

Niobium is a lustrous, grey, ductile, paramagnetic metal in group 5 of the periodic table (see table), with an electron configuration in the outermost shells atypical for group 5. (This can be observed in the neighborhood of ruthenium (44), rhodium (45), and palladium (46).

Although it is thought to have a body-centered cubic crystal structure from absolute zero to its melting point, high-resolution measurements of the thermal expansion along the three crystallographic axes reveal anisotropies which are inconsistent with a cubic structure.[28] Therefore, further research and discovery in this area is expected.

Niobium becomes a superconductor at cryogenic temperatures. At atmospheric pressure, it has the highest critical temperature of the elemental superconductors at 9.2 K. Niobium has the greatest magnetic penetration depth of any element. In addition, it is one of the three elemental Type II superconductors, along with vanadium and technetium. The superconductive properties are strongly dependent on the purity of the niobium metal.

When very pure, it is comparatively soft and ductile, but impurities make it harder.

The metal has a low capture cross-section for thermal neutrons; thus it is used in the nuclear industries where neutron transparent structures are desired.

The metal takes on a bluish tinge when exposed to air at room temperature for extended periods. Despite a high melting point in elemental form (2,468 °C), it has a lower density than other refractory metals. Furthermore, it is corrosion-resistant, exhibits superconductivity properties, and forms dielectric oxide layers.

Niobium is slightly less electropositive and more compact than its predecessor in the periodic table, zirconium, whereas it is virtually identical in size to the heavier tantalum atoms, as a result of the lanthanide contraction. As a result, niobium’s chemical properties are very similar to those for tantalum, which appears directly below niobium in the periodic table. Although its corrosion resistance is not as outstanding as that of tantalum, the lower price and greater availability make niobium attractive for less demanding applications, such as vat linings in chemical plants.