Molybdenum is a chemical element with symbol Mo and atomic number 42. The name is from Neo-Latin molybdaenum, from Ancient Greek Μόλυβδος molybdos, meaning lead, since its ores were confused with lead ores. Molybdenum minerals have been known throughout history, but the element was discovered (in the sense of differentiating it as a new entity from the mineral salts of other metals) in 1778 by Carl Wilhelm Scheele. The metal was first isolated in 1781 by Peter Jacob Hjelm.

Molybdenum does not occur naturally as a free metal on Earth; it is found only in various oxidation states in minerals. The free element, a silvery metal with a gray cast, has the sixth-highest melting point of any element. It readily forms hard, stable carbides in alloys, and for this reason most of world production of the element (about 80%) is used in steel alloys, including high-strength alloys and superalloys. 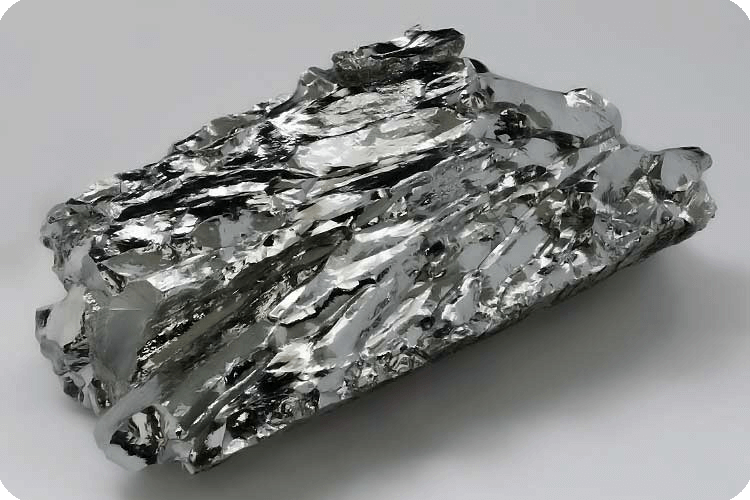 Most molybdenum compounds have low solubility in water, but when molybdenum-bearing minerals contact oxygen and water, the resulting molybdate ion MoO2- 4 is quite soluble. Industrially, molybdenum compounds (about 14% of world production of the element) are used in high-pressure and high-temperature applications as pigments and catalysts.

In its pure form, molybdenum is a silvery-grey metal with a Mohs hardness of 5.5, and a standard atomic weight of 95.95 g/mol. It has a melting point of 2,623 °C (4,753 °F); of the naturally occurring elements, only tantalum, osmium, rhenium, tungsten, and carbon have higher melting points. It has one of the lowest coefficients of thermal expansion among commercially used metals. The tensile strength of molybdenum wires increases about 3 times, from about 10 to 30 GPa, when their diameter decreases from ~50–100 nm to 10 nm.

Molybdenum is a transition metal with an electronegativity of 2.16 on the Pauling scale. It does not visibly react with oxygen or water at room temperature. Weak oxidation of molybdenum starts at 300 °C (572 °F); bulk oxidation occurs at temperatures above 600 °C, resulting in molybdenum trioxide. Like many heavier transition metals, molybdenum shows little inclination to form a cation in aqueous solution, although the Mo3+ cation is known under carefully controlled conditions.